How To Determine The Quality Of Animated Dinosaurs? 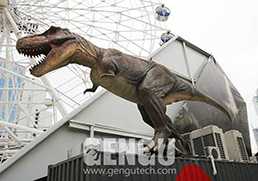 Regarding how to distinguish the quality of animated dinosaurs, it must be the knowledge that every customer who wants to do a dinosaur exhibition wants to know. Who are the big and small dinosaur exhibition suppliers on the market who are the true high-quality suppliers? Whose dinosaur is the best? Whose anime dinosaurs are updated? Whose animated dinosaurs are more realistic? Let the supplier of Theme Park Animatronic Dinosaurs tell everyone about it.

At present, many animated dinosaur suppliers in the market often reduce the cost of dinosaur materials in order to save costs. As a result, the quality of dinosaurs is unsatisfactory. For example, the internal structure of dinosaurs is mainly steel. Everyone knows that domestic Steel is divided into many grades. The simplest method is the national standard and non-standard. In fact, non-standard steel is divided into many levels. Dinosaur models made of different grades of materials are directly related to the service life of dinosaurs. Poor materials may deform or damage the dinosaur model during transportation, which may directly cause this dinosaur exhibition to be unsuccessful.

Before doing the Animatronic Dinosaur exhibition, everyone must go to the supplier warehouse to see the condition of the dinosaurs, whether they are old or new. You can press the appearance of the dinosaurs to see if the dinosaurs are flexible. After connecting the power, see if the dinosaurs are realistic. Animated dinosaur sounds. Is it clear and loud. Also, listen to whether the sound of dinosaurs matches the type of dinosaurs. For example, if a carnivorous tyrannosaurus makes a triangle sound, these simple mistakes must be avoided. These seemingly simple errors not only affect the balance of the event company's receipt, but also affect the organizer's brand image.

At present, our company has hundreds of different kinds of dinosaurs for everyone to choose from, and they are all brand new products, and there are also Dinosaur Costumes. We have a first-class follow-up service team, and we have nearly ten years of experience in transportation, installation, and exhibition. We will solve any problems in the animated dinosaurs during the exhibition. We have remote control technology for each dinosaur in the exhibition. In the shape of dinosaurs, we have experts from paleontology to personally guide and produce. Each of our dinosaurs is completed under the guidance of dinosaur experts. All the dinosaur shapes are scientifically based, and they are based on dinosaur fossils that have been unearthed to do it.