Home>Blog>Industry News
Why Is The Animated Dinosaur Exhibition Popular? The Best Dinosaur Toy For Children

For dinosaur fans, in addition to seeing the dinosaurs on the movie screen, visiting a large animated dinosaur booth and having a close-up observation contact with the production of realistic dinosaurs is also a must-miss. Dinosaur models can be used to organize large exhibition stands, as well as events on a variety of themes. So, how exactly is an animated dinosaur model made? The Playground Animatronic Dinosaur T-rex supplier will take everyone to understand in detail below. 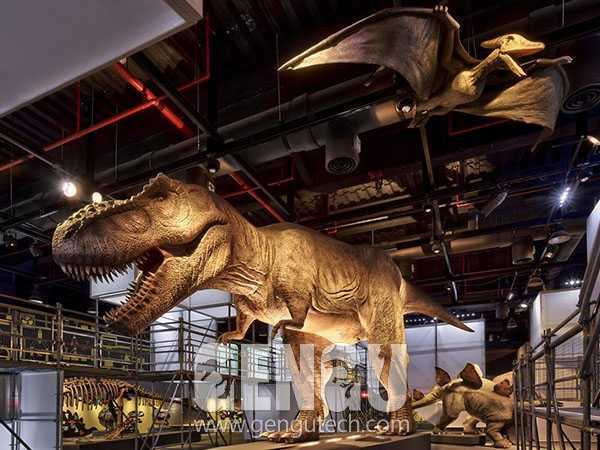 The realistic effects of animated dinosaur models are closely related to the selection of materials. The main materials commonly used are sponge foam, glass steel, and cement sculptures, and the skeleton of dinosaurs is constructed of steel bars. Some dinosaurs can move their joints and make sounds because they are equipped with a motor and sound control device. If you want the dinosaur eyes to shine, you can install a small light bulb as a light source.

According to different manufacturing methods and selected materials, there are two main types of animated dinosaur models, as follows:

The first type is static dinosaur sculpture, that is, steel bars are used as skeleton joints, and cement sculpture or glass fiber reinforced plastic is used as muscle skin. Therefore, this type of animated dinosaurs only have realistic dinosaur appearance but cannot do mechanical movement:

The second type, Robot Animatronic Dinosaur, uses steel bone racks, but is filled with sponge foam or other special soft materials as muscle skin. This type of touch is also very realistic, and it can also move joints, emit roar, Swing your tail, the effect can almost be fake.

In fact, we often see animated dinosaurs in life, especially after learning about dinosaurs in the famous Hollywood blockbuster Jurassic Park, more and more people are interested in dinosaurs, so animated dinosaur models are the most popular. The important use is to hold various exhibition activities. Many exhibition halls, real estate openings, real estate activities, large shopping malls, theme booths, theme parks, large science and technology museums, square schools and some theme art museums will be used. Animated dinosaur models, as well as Museum Dinosaur Skeleton.

So, do many people like dinosaur models? For the organizer of the exhibition booth, the audience's preferences and responses are the most important. Then, can animated dinosaurs be used as exhibits to attract the audience? The answer is yes, especially for adults who work long-term. In their spare time, they can take their children out of a bunch of electronic devices and participate in a very interesting dinosaur exhibition. It's perfect to increase personal interaction. For adults and children, attending a large-scale, realistic and animated dinosaur exhibition is a new and interesting and coveted thing.