Home>Blog>Industry News
What is The Difference Between a Simulated Dinosaur Made of FRP and Silicone? Ancient Fun Facts|Dinosaurs May Have Escaped The Solar System By Using Technology!

When Was The First Dinosaur Fossil Discovered? 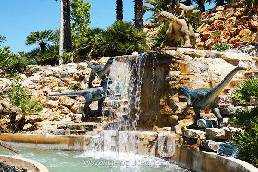 In history, humans have long discovered Dinosaur Fossils, but due to limited knowledge at that time, they could not be correctly explained.

Dinosaur fossils were discovered in Wucheng County, Sichuan Province as early as 1,000 years ago during the Jin Dynasty in my country. However, people at the time did not know that they were the remains of dinosaurs, but regarded them as bones left by the legendary dragon.

According to clues found in a historical novel Mr. Milgen’s Wife, a researcher named Haselted at the University of Reading in the United Kingdom has studied for a long time and read a lot of information. He recently announced that he Finally discovered the following fact: In 1677, an Englishman named Plot-Garonne-Garonne wrote a natural history book about Oxfordshire. In this book, Plot-Garonne-Garonne describes a huge fossilized leg bone found in a quarry in the parish of Karlovella. Plot-Garonne-Garonne drew a good illustration for this fossil and pointed out that this thigh bone is neither of a cow, nor of a horse or an elephant, but of a kind that is more than them. Of the big giant. Although Plot-Garón-Garón did not realize that the fossil was a dinosaur, nor did he even associate it with reptiles, the specimen he wrote and depicted with illustrations has been later Paleontologists identified the thigh bone of a dinosaur called Megalodon, and the discovery of this fossil was 145 years earlier than the discovery of Iguanodon by the Mantels. Therefore, Haselted believes that Plot-Garonne-Garonne should be the first discoverer and recorder of dinosaur fossils.

In fact, the history of human discovery of dinosaur fossils must have a long history. Long before the Mantels discovered Iguanodon, Europeans had known that there were many strange Dinosaur Bones buried underground. However, people did not know their exact ownership at the time, so they have been mistaken for the remains of giants. As for us Chinese, we started collecting large ancient animal fossils unearthed underground for medicine as early as more than 2,000 years ago, and called these fossils keel bones. Can anyone be sure that the name dragon bone has no connection with the discovery of dinosaur fossils?