Home>Blog>Industry News
Ancient Fun Facts|Dinosaurs May Have Escaped The Solar System By Using Technology! The Ancient Upgrade and Transformation of The "Earth Center Jurassic" Presents a New Dinosaur Theme Park. 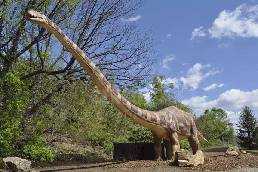 Diplodocus is a very famous dinosaur. I believe everyone who knows dinosaurs will know Diplodocus. Diplodocus was once a representative of this species.

Diplodocus has an obvious shortcoming. Its neck cannot be too high. So when they want to lift their necks, they can only stand up with two hind legs.

Diplodocus was once considered to be the longest Dinosaur, with a body length of more than 30 meters, a neck of about 7 meters, and a tail of about 14 meters. However, they were very "skinny" and weighed about 10 tons. Brachiosaurus or Confused Dragons with similar body lengths are nearly half lighter, and they are indeed very "thin".

The survival of Diplodocus and western North America at the end of the Jurassic period. Dinosaur Fossils were first discovered in 1878 by Samuel Wendell Williston in the Cliffs of Comor, Wyoming.

Diplodocus often appears in movies and TV shows about dinosaurs, dating back to the animated film Gertie the Dinosaur in 1914. In the "Spring Rite" section of the Disney animated film "Fantasia", many sauropod dinosaurs appear, one of which may be Diplodocus. Diplodocus also appeared in the second episode of the BBC TV show "Dancing with Dinosaurs".