Why Do Kids Love Dinosaurs?

I wonder if mothers have found that children are fascinated by dinosaurs. Children need to read dinosaur books, buy dinosaur toys, and sleep with dinosaurs. Why are children so obsessed with dinosaurs? The Animatronic Dinosaurs Supplier will give you an analysis below. 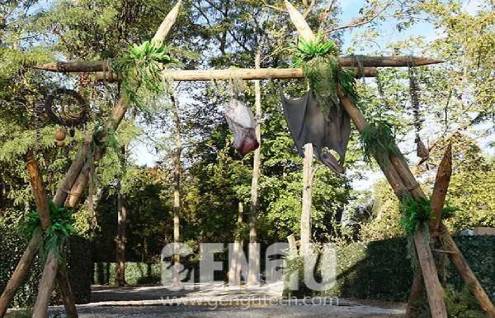 Although the children are not deeply involved in the world, they are "newborn calves are not afraid of tigers" in many aspects, but in fact, they also have many times of fear, and they know that they need the protection of their parents. However, the child is still eager to “escape” from the protection of his parents, hoping to become stronger. The advent of dinosaurs fulfilled this point. Don't talk about children, it is because many of us adults think that dinosaurs are extremely powerful and extremely powerful, and even think that dinosaurs are the most powerful creatures in the world. And this kind of knowledge of dinosaurs will give children a strong sense of security, and children will feel that dinosaurs can give themselves strength. With dinosaurs, children will get strong psychological support inside, and they will not become consciously stronger and more confident.

Compared with the tigers and lions that can be seen in the zoo, dinosaurs have a more mysterious sense, because dinosaurs do not exist in our lives, we can only go to museums or theme parks to enjoy Animatronic Pterosaur. The mystery of dinosaurs has a strong appeal to children, which can satisfy children's curiosity while giving them a lot of imagination. Children can play their imagination infinitely while playing dinosaurs. They feel that dinosaurs are the strongest creatures in the world, and they can "control" dinosaurs. The satisfaction and expectation obtained from it are unmatched by other toys.

3. Give your child the "right to speak"

In fact, many parents know very little about dinosaurs. Many children like dinosaurs because their parents have "short knowledge" and follow their children to read some books on dinosaurs. They specifically remember the names of dinosaurs, but they are far worse than children. Children can say it, and even come up with a one-to-one correspondence with their dinosaur toys. It is precisely because children's knowledge of dinosaurs is far greater than that of their parents, so when they talk about dinosaurs with their parents, they can have a certain "right to speak." This will make the child feel very fulfilled, and at the same time it will make the child more fond of dinosaurs.

4. Affected by TV and other children

Another very realistic reason is that children are influenced by the cartoons they watch or the children around them. In addition, there are many dinosaur halls, dinosaur parks and other facilities all over the place. There are many animated dinosaurs and Dinosaur Costumes. Children will find this kind of hobby cool and can show it off among children. Or if the kids around are playing dinosaurs, the children will also be affected, and they will gradually love dinosaurs.

In fact, no matter what kind of reason the child likes dinosaurs, what parents should do is to respect the child's hobby and protect the child's imagination. Parents should not crack down on children's right to like dinosaurs. If they have time, they can take their children to play in the dinosaur theme park.