Home>Blog>Industry News
The Development History Of Dinosaur Animation Industry From Inside Out: How Is A Dinosaur Simulation Produced

What Did The Early Dinosaurs on Earth Look Like

What did early dinosaurs look like on Earth? We are familiar with dinosaurs that were either tall and powerful, with sharp teeth, or grotesque in size, dexterous and agile, some fierce and docile, and some in big holes in the water. But the earliest dinosaurs were not so decent. They were average in appearance and small in size, hardly comparable to the descendants of the later emergence of the wang-hua eight doors. It is evident that the differentiation of dinosaurs at that time was not very obvious. So are there any dinosaurs like our electronic dinosaur exhibit?

The early dinosaurs are the Triassic dinosaurs. At that time, they had just evolved from their primitive ancestors. Due to their age, dinosaurs left a lot of fossils as their big and large horns were exposed in a very limited number and variety. Early dinosaur fossils are found in Europe, Africa, and North and South America. Although there are few fossils, a rough impression can be obtained from their remains, and we have many dinosaur models. Some are more than 20 meters long, while others are only a few tens of centimeters. The most representative early dinosaur is the "Episosaurus" found in the Andes of northwestern Argentina. It is a carnivorous dinosaur from the late Triassic period 220 million years ago. It was 12 centimeters long and weighed about 11 kilograms. It had thick hind legs, short forelimbs, and walked on two feet; it also had strong claws and sharp teeth. The claws are shaped like eagle claws. Visually, the robber dragon is a complete "robber mouth".

Another well-preserved fossil of an early carnivorous dinosaur was collected in the Andes. It was 1.801 meters tall, 5.1 meters long, and weighed about 111 kilograms when alive. It had thick front claws and distinctive lower jaws and serrated teeth suitable for hunting. It can walk or run upright after use. It is a Herreraurus that lived 230 million years ago. 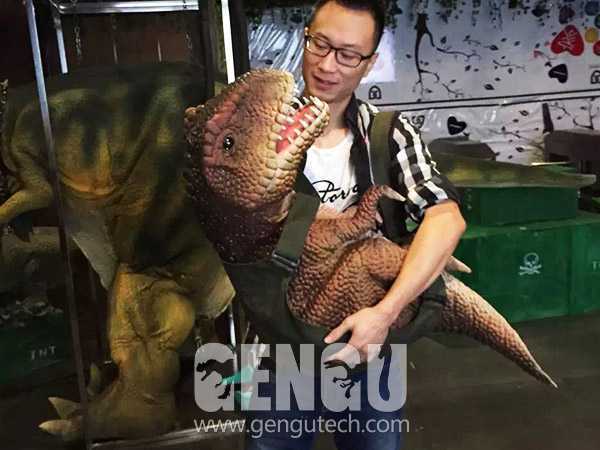 A fairly complete fossil of an early dinosaur was also unearthed in the United States many years ago. It was 2.5 meters long, up to 1 meter at the hips, and weighed about 90 kilograms when alive. It could also walk on all fours and stand on its hind legs to simulate these dinosaurs. Isn't it very popular with everyone? There are also such dinosaurs in the exhibition of electronic animated dinosaurs. Not only do we have such a dinosaur, but we also have the same fossil skeleton. It has a long neck and tail, and is a herbivorous dinosaur. It is estimated that it might be one of those lizard-footed dinosaurs with abnormally large body size in the future. Ancestral type. Scientists have confirmed that this ancestral herbivorous dinosaur lived about 220 million years ago.

Early dinosaur fossils tell us how the bodies of dinosaurs grew from small to large and how species diversified from single to diverse. Another important fact is that the walking posture of early dinosaurs changed dramatically, from a writhing crawl to a "walking" posture.