Why Are The Animals Rarely Grown As Big As Dinosaurs? 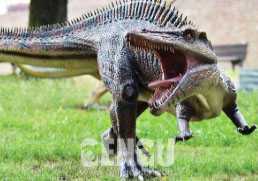 Here is Fiberglass Dinosaur Supplier talking about Why are the animals rarely grown as big as dinosaurs.

The earth has grown to the age of tens of billions. Before the human race flourished, there were still many hegemons. The most familiar ones are dinosaurs. From the fossils excavated by archaeological activities, in the era of dinosaurs, each animal is surprisingly large. The largest of the Lianglong fossils unearthed in Sichuan, China, reached an astonishing 70 meters. According to the skeleton estimation, the original living Lianglong can weigh up to 200 tons. What is this concept? The length of 70 meters is equivalent to a 30-story building. So why are the animals now rarely grown as big as dinosaurs? Scientists said that it is not impossible to not want to. 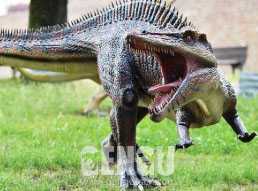 In our current life, there is no such thing as a giant. The largest mammal blue whale on the earth can grow to a length of 40 meters and weigh up to 150 tons. This is indistinguishable from the original giant dinosaurs, and the modern animals are not as big as dinosaurs. In fact, the evolutionary direction of choice between species is different. In the huge mammals of blue whales, there are no genes that inhibit growth. Therefore, it grows up continuously in the constant eating, and the older the blue whale is, the bigger it is.

Why is there no such large organism on land? The reason is also very simple, because of their huge size, they are unable to maintain their own support. We all know that water is buoyant, so even if it is bulky, the blue whale is very amazing. But it can rely on buoyancy to reduce its own burden, and life on land is different. On land, we must overcome the gravity of the earth no matter what action we do. Therefore, the volume is large, and the effort required is greater. The strength of the flower is large, and the energy consumed is greater. Today's animals cannot support this energy consumption.

And we all know that as the Earth's environment changes, the diversity of living things has also been decreasing. Blue whales in the sea can grow to such a large size because they have enough food. There are countless small animals like krill in the sea that can serve as food for blue whales, providing it with plenty of protein and nutrients. But on the land, if the body is too large, there is not enough food to support them. Therefore, in the choice of evolution, they have abandoned the direction of body growth.

In fact, in the world of dinosaurs, not all dinosaurs are stupid, and there are many short and lean existences. Like the Raptor, this name is a very powerful dragon, the body is similar to the current cow and horse body. And not all dinosaurs were extinct with the impact of the meteorite. Many of them have evolved again in the passage of time and become the creatures we often see today, such as birds.

In summary, in fact, the current creatures are not without the possibility of growing up. In fact, there are many examples in life. Like Japan's nuclear radiation, mice and cats that are rapidly growing due to genetic mutations Explain that the creature is likely to grow up. But the reason why there are no such large animals exists is that they don't want to grow up when they are born. I don't know what everyone thinks about it? Welcome to leave a message in the comments section.

At the same time, Fiberglass Dinosaur Model can be offered for you.  Looking forward to receiving your inquiry.