Home>Blog>Industry News
How To Select A Theme Park? What Are The Four Deadliest Dinosaurs? 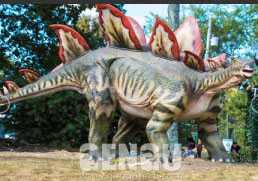