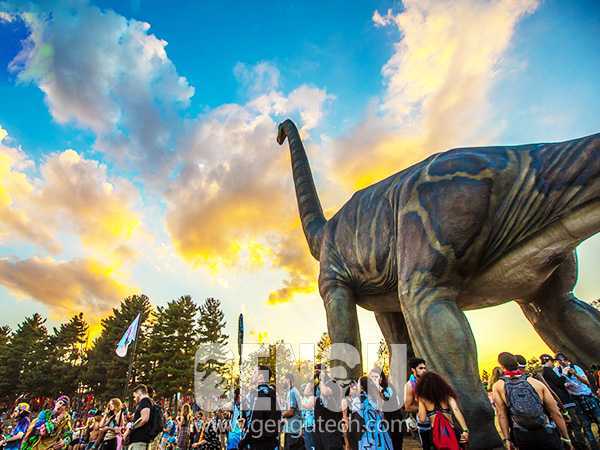 Dinosaurs may be extinct, but you will agree that these prehistoric creatures are still present in our minds and influence the way we live.

Tyrannosaurus rex, Triceratops, Brachiosaurus and many more are just some of the famous prehistoric creatures that we love. For the most part, we just want to know what really happened in this era. How these creatures lived and co-existed in the same ecosystem, and what they ate, intrigue us. Scientists and palaeontologists have studied this area extensively and have discovered many interesting facts about them from fossils.

The Brachiosaurus had very strong legs, strong enough to support its huge body, while its long neck was stout. The head, although small, was large enough to support its large snout. You may have seen an animated image of it in Un Gran Dinosaurio. Also, unlike most other lizard-footed dinosaurs, Brachiosaurus had longer front legs than hind legs and higher shoulders than hips. This means that its neck would have lifted off its torso like a giraffe. Quite an interesting animal! The first Brachiosaurus fossil was discovered by an American paleontologist in 1900. It was found in the Morrison Formation in western Colorado - a popular hotspot for dinosaur fossils.

Scientists named the dinosaur "Brachiosaurus", which means "arm lizard". Brachiosaurus roamed the Earth in the late Middle Jurassic, around 155.5 to 150.8 million years ago. This was long before the giant Tyrannosaurus rex.

Brachiosaurus fossils have been found in many parts of North America, including Wyoming, Colorado, Oklahoma and Utah. They have also been found in other parts of the world, such as Portugal and Algeria.

The question of the exact weight of Brachiosaurus has not been fully established for many years. But, of course, we know that Brachiosaurus was definitely a huge creature. In fact, when Brachiosaurus was discovered in 1903, it was declared to be the largest dinosaur ever recorded, but it is now believed that other lizard-footed dinosaurs were larger and heavier than Brachiosaurus.

It is estimated that Brachiosaurus could have reached a staggering height of 85 feet (28 metres). Although young Brachiosaurus would have been a target for the larger predators that existed at the time, adult Brachiosaurus is unlikely to have had any predators due to its sheer size.

The Brachiosaurus was a herbivore, feeding only on plants. Its large size makes it ideally suited to feeding on conifers, and it can also forage on large shrubs. Being so large, the Brachiosaurus would have had to consume a large amount of food.

The Brachiosaurus' huge chisel-like teeth (26 in the upper jaw and 26 in the lower jaw) are perfect for stripping vegetation from trees. They were not designed for chewing, however, and Brachiosaurus would have swallowed its food whole. Polished pebbles have been found in the remains of lizard-footed dinosaurs. This suggests that the dinosaurs consumed them to help them digest the thorny vegetation.

Dinosaurs were remarkable animals with incredible features. Scientists and paleontologists are still studying these creatures. You can be sure that the more they explore, the more discoveries they will make. Brachiosaurus has inspired many films and books. There is much more to learn about these prehistoric creatures. The exploration never ends.

What's more, you can see our Brachiosaurus dinosaur puppets or any of your child's favourite dinosaurs. Contact us here and surprise your child.

Colours: same as picture or customised to buyer's choice. Sizes: from 1m to 60m long, other sizes are also available.