Home>Blog>Industry News
If Humans Can Domesticate Dinosaurs, Which One Do You Want? Chinese Bird-like Dragon (sinornithomimus) - Ostrich

If you have any idea about Fiberglass Fighting Dinosaur, welcome to contact us and discuss.

What are the living animals of the dinosaurs recently? It is a bird. So, the first thing to consider is whether we can find a large chicken or duck from the dinosaur.

The good news is that dinosaurs are indeed laying eggs. Eggs are very good food. The protein composition is good. You can keep laying eggs with just one animal, and you can keep it for a certain period of time—provided you don't knock it open.

Therefore, the size of the egg is extremely suitable, and the ostrich egg is too big.

Unfortunately, the dinosaurs are large. Although not all dinosaurs are giant behemoths like Tyrannosaurus Rex, overall, the known dinosaurs do have a few laps overall than known mammals or birds. 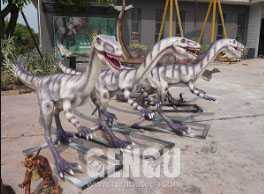 One possible dragon election is the Little Dragon. It is almost the smallest of the non-bird dinosaurs, with a length of 1 meter and a weight of only 1 kilogram, which is comparable to the original chicken. They are relatives to the smartest toothed dragon, so it’s not too stupid to think.

The Little Thief has a big "advantage", that is, if you grab one and leave it in the yard, it is hard to escape.

The dragon's limbs have wings and have initial flight and gliding ability, but its movement on the ground is very embarrassing, and it is now considered that it is very difficult to take off from the ground and get up from the branches.

The flight ability of the original chicken is also general, which may be one of the reasons why it became an early domesticated bird.