Was Stegosaurus Really the Stupidest Dinosaur

Stegosaurus was the largest and most famous member of the Stegosauridae family. It roamed the open plains of the late Jurassic period, located in what is now North America. The plates on its back, small head and spiky tail made it a peculiar and unique dinosaur. This herbivore evolved to seek food among the low vegetation of the late Jurassic. The spikes on its tail would have been a powerful weapon against any hungry predator.

Stegosaurus is often referred to as the stupidest dinosaur because of its very small brain. In fact, most scientists initially believed that its brain was too small to control such a large creature, and that it used a secondary "brain" located above its hind legs to help control its movements. This is not actually a brain, but a bundle of nerves that helps transmit information from its real brain. Its brain was once thought to be the size of a walnut, but CAT scans prove it is actually the size of a kitten.

The spikes on its tail have also been the subject of some controversy. For many years, every Stegosaurus model showed its spikes sticking up into the air. It was not until the 1990s that it was accepted that these spikes extended horizontally from the ground and would be an effective defensive weapon when swung at hunters.

Stegosaurus, which means "roofed lizard," stems from the belief of 19th-century paleontologists that the plates were placed flat on its back like shingles on a roof. But most evidence supports the idea that the plates were arranged in two alternating rows, from the dinosaur's neck to its rear, with the pointed side facing upward. Its 17 plates, called shield plates, were made of a bony material called osteoderms, but were not solid. They have lattice-like structures and blood vessels. 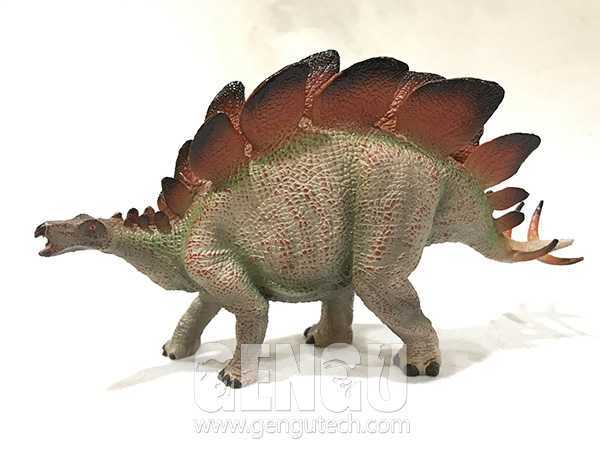 While it is uncertain what the purpose of these plates was, the blood vessels within the plates suggest that temperature regulation may have been a function. However, this theory has been challenged - according to an analysis published in 2005 in the journal Paleontology, the microstructure of the plates suggests that they were not used to dissipate heat. Stegosaurus likely used its plates for display purposes. Showing off, identifying the species, attracting mates - that sort of thing.

Stegosaurus was a herbivore because its toothless beak and small teeth were not designed for eating meat, and its jaws were not very flexible. Interestingly, unlike other herbivorous beaked dinosaurs (including Triceratops and Duck-billed Platypus), Stegosaurus did not have strong jaws and grinding teeth. Instead, its jaw may have allowed only up-and-down movement, and its teeth were rounded and peg-like. It also had cheeks, which gave it room to chew and store more food than many other dinosaurs.

Dinosaurs are always interesting to learn about, but it's just a shame that now we can only see images of them from movies and TV shows. If your child is interested in dinosaurs, why not give him a puppet toy? If your theme park is opening a new section, why not buy a dinosaur sculpture? Feel free to contact us for a product quote! You are welcome to leave your comments in the comment section.